That wraps up the 2022 season. It ended up being a pretty good day and nice night for launching. If you have pictures, please post them in the gallery. Stay tuned for information on our January Winter Follies. 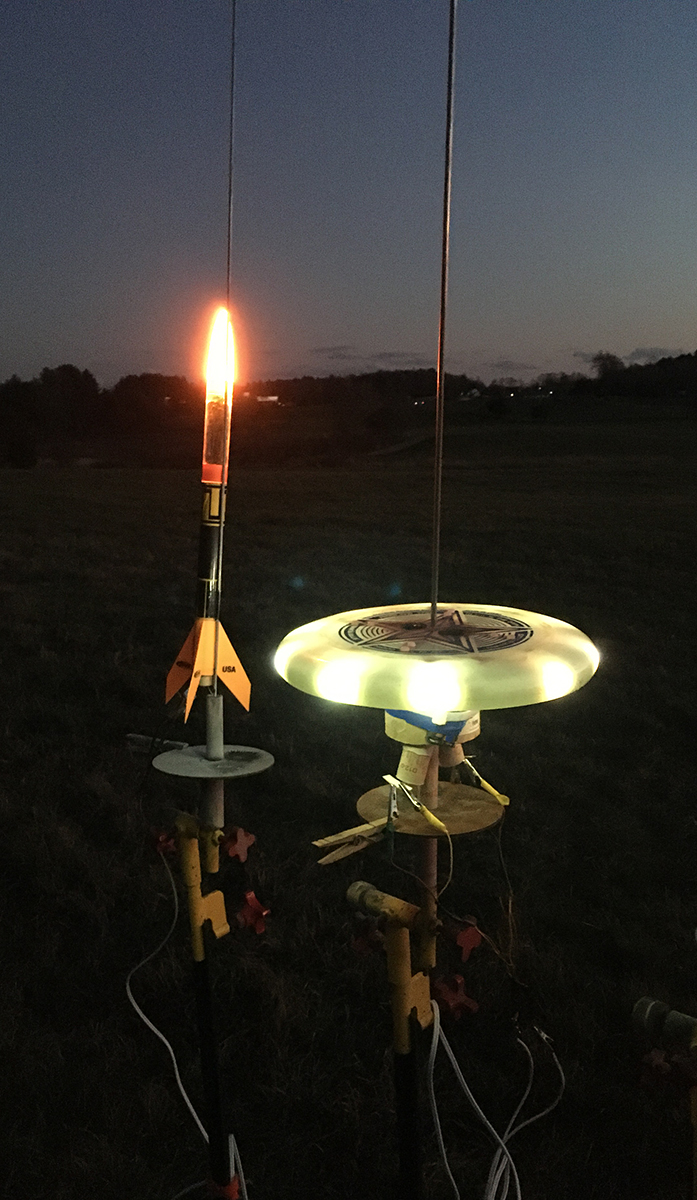 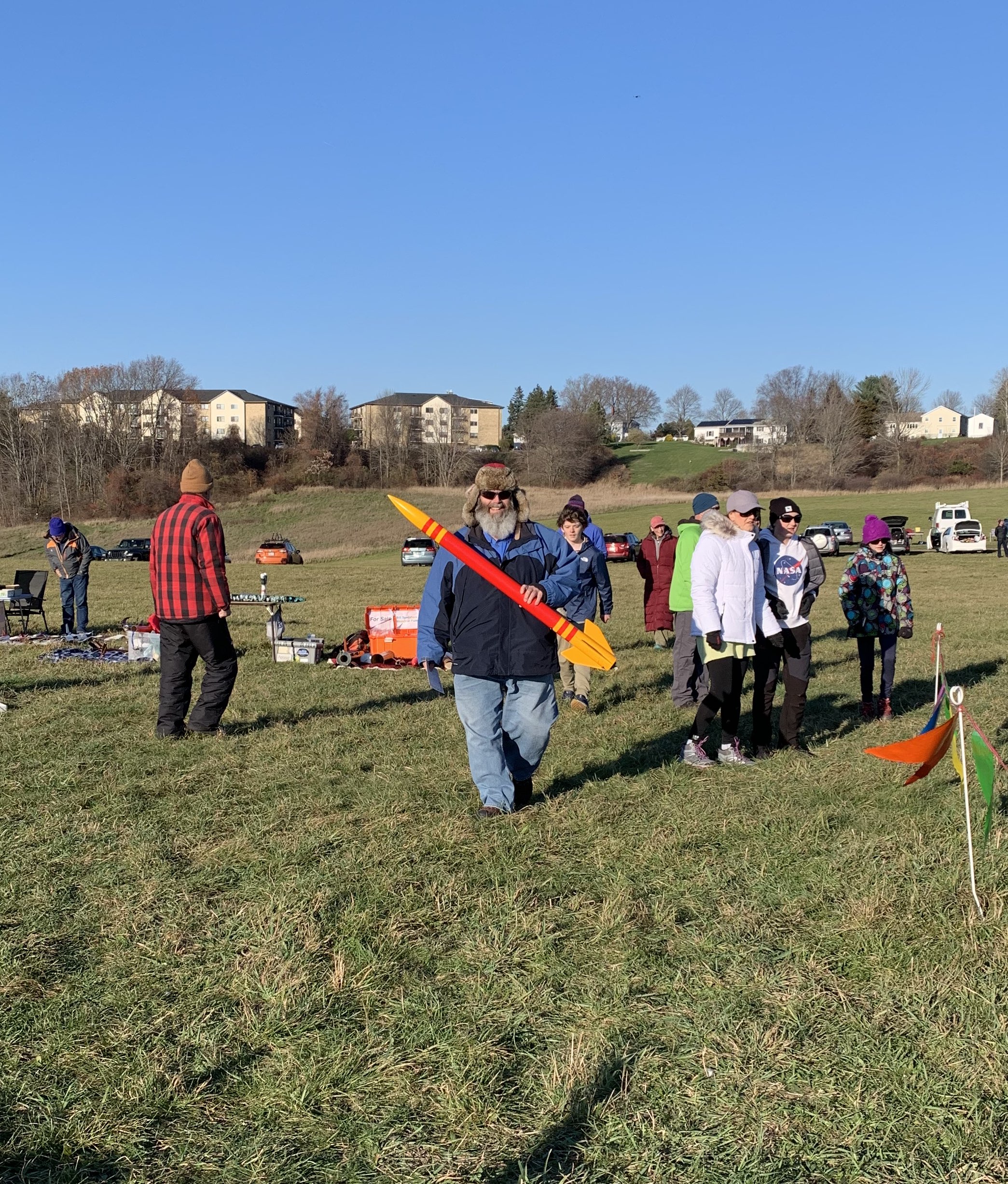 Mr. Blade's launch was one of 212 launches that Saturday with motors ranging from 13mm A to I. There were 9 high power
flights and, as yet unconfirmed reports of three CATO's. There were close to 100 people in attendance at the maximum, and included the U. Mass Amherst SL1 team and the  Westboro High School TARC team. The Westboro team had several practice TARC launches and sold baked goods as a fund raiser for their team. Other notable flights that day included a drag race of two Upscale Deuce's Wild, each flying on two CTI F79 Smokey Sam motors by Curtis H. A somewhat tipsy Princess Leia was launched by Scott Clement. Howard G. launched his Aerobe Hi as an initial try at using the Apogee Components new RC Gliding Parachute System. Unfortunately, the rocket lawn-darted; hopefully the electronics survived for another try. Your reporter took time out from his journalist duties to launch several rockets including his  'Bird of Prey'.

The field closed down a little earlier than usual so as to set up for the annual CMASS Night Launch. The night launch is a
joint launch with NORG and was a well-attended. The skies were clear as the temperature dropped after the sun went down. There were about a dozen launches with motors ranging from A through F. 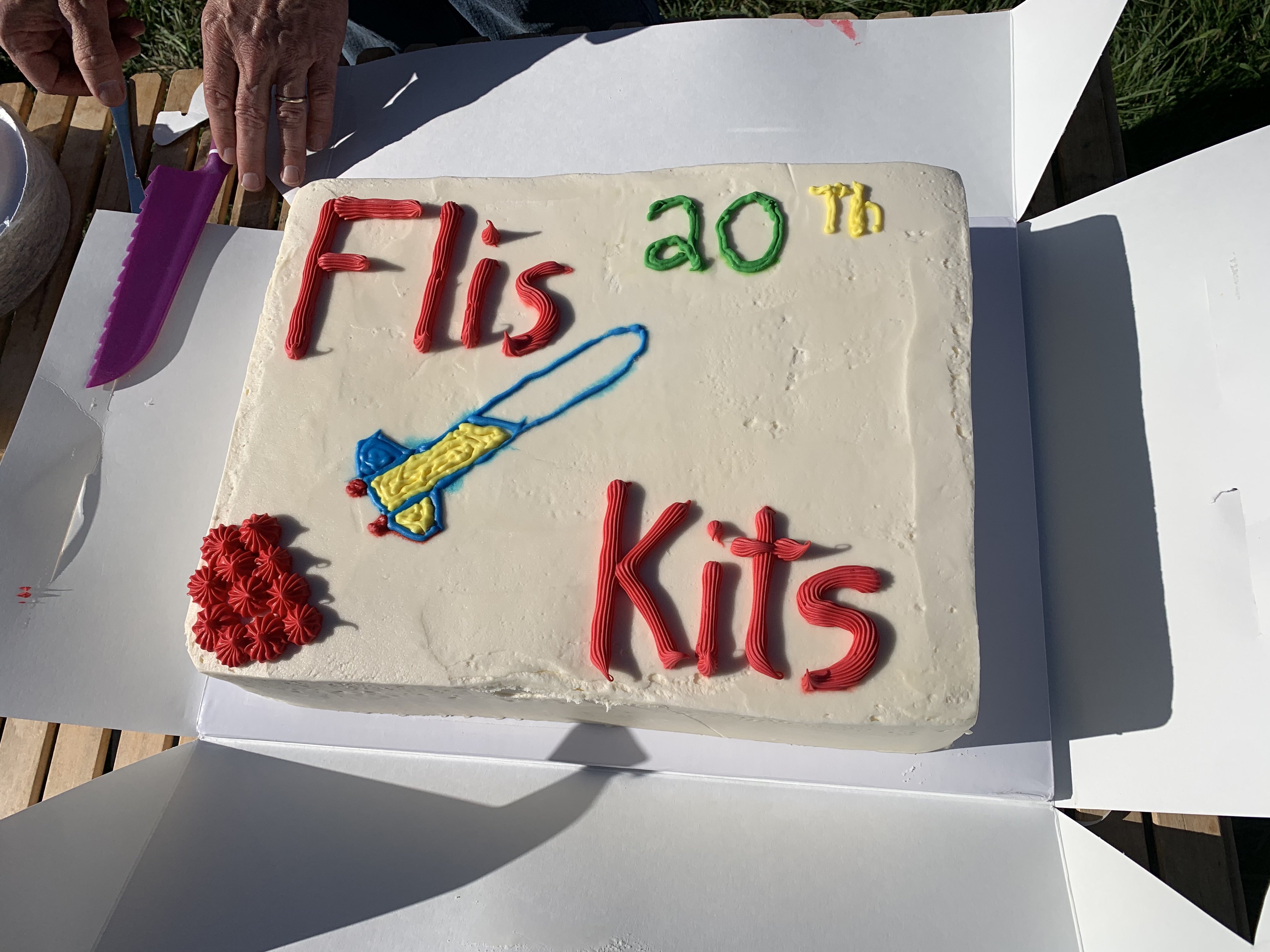 Twice postponed, first due to lack of rain and the second due to rain, and a month late, but we finally had our 20th FlisKits Anniversary Launch. It was a great day too, with clear skys and temps in the 60's. The winds were light to moderate, although blowing toward the homes on the northside of the field, which limited high power flights. The winds started drifting toward the power lines in the afternoon; so high power flights were stopped at around 2:00. FlisKits paid for the field, so no launch fees and there were contests, prizes and cake!

It was a busy launch day. At peak attendance, there were over 100 people and we had 337 launches! Motors ranged from micromaxx to J. There were only nine high power flights because of the wind direction; but three of them were J motors and one successful Level 2 certification. There was one CATO (sort-of). Since it was a Fliskits Anniversary launch there were a lot of FlisKits flown - 62 in all with 13 being Deuce's Wild. The Deuce's Wild has to be FlisKits signature kit. The 62 included a really nice SPAD (Tony Vincent) and Decim8 (Mike Lehmann)!

Ray DiPaola (FlisKits) had three contests. 1) Most MicroMaxx flights with FlisKits Micro-to-the-Maxx FlisKits; prize was two Micro-to-the-Maxx kits. 2) Most FlisKits launched during the day; prize was $25 off any purchase during the day. 3) A-B-C-B-A race with FlisKits rockets; prize was $25 off any purchase during the day. Deb Zeigler won both the MicroMaxx and A-B-C-B-A race. Joe Robertson won the most FlisKits flights with 10 flights. There was cake served after hot dogs and with the big crowd there that day, it didn't last long. I launched my Streaming UFFO to announce the cake. Unforutnately, the motor chuffed and spit and the rocket never got up to speed. It reached about 20 ft, then arched over. It was kind of a windy day for foam cup rockets and the only other foam cup rocket was my two-stage Decaffeinator, which actually did fly well! And of course, there was a Fric-N-Frack drag race - seven Frick-N-Fracks and they all went! 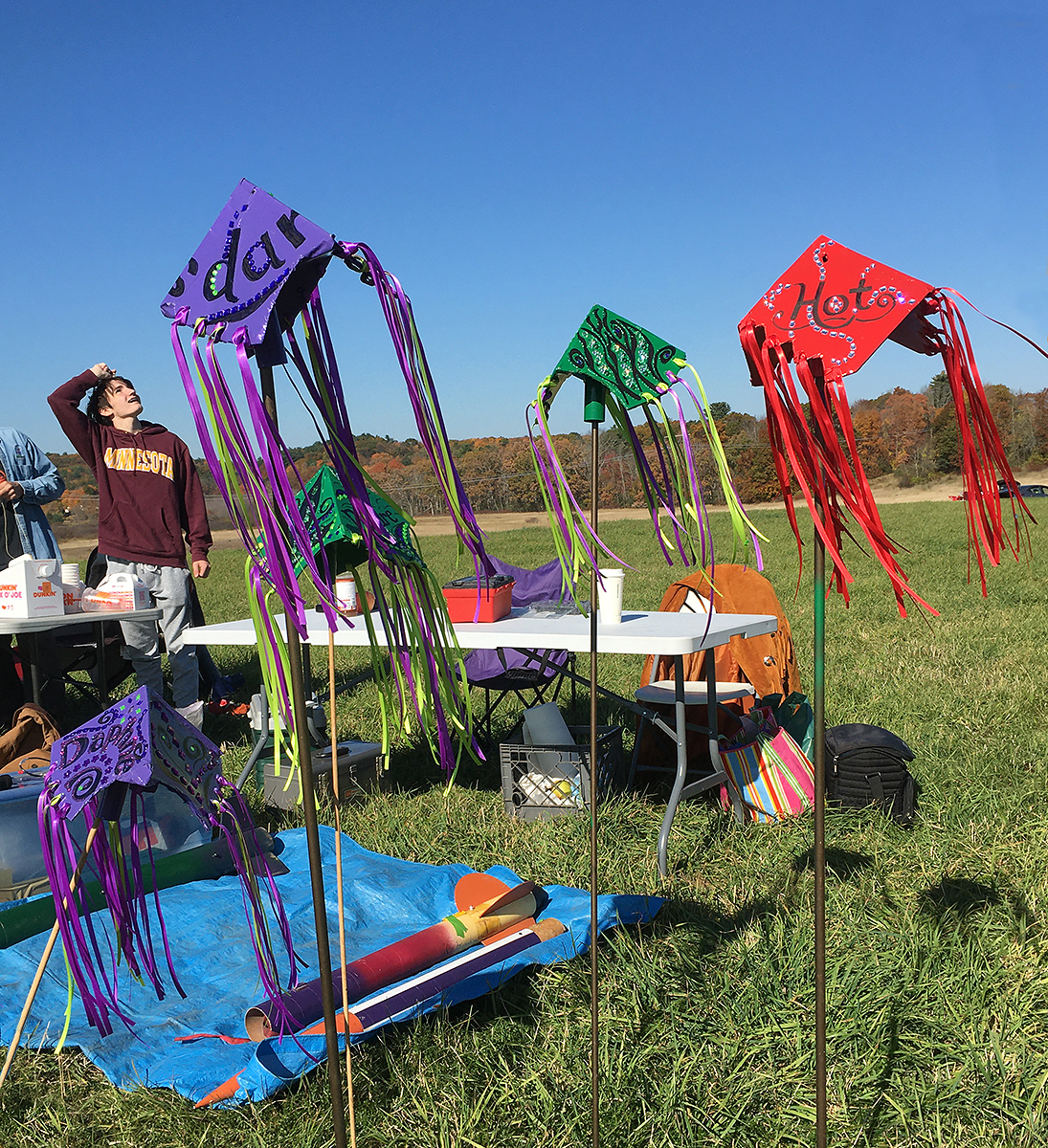 That wasn't the only drag race either! There were four other drag races, including nine Mega Mosquitos, three Monster Mud Wasps and two Comet Chasers. The most spectacular, and most scarry, was a drag race of five tassled-29mm Stealths, all on G80's. All five made it to about 10 ft, darted in different directions, making a few loops in the process. Very exciting! There were also several seasonal rockets for the Fall and Holloween. However, the rockets of the day have to go to Rod Thomas, with some really creative mid power rockets that included his Wallace & Gromit, Great Pumpkin, and Retrofuturisik. Look for their pictures in the Gallery.

Thanks to Kenn, Guy, Matt, Tim, Tony, Linda, John P. and everyone else that helped out. Pictures are in the Gallery; please post yours. Our next launch is Nov 12th in Amesbury. This will be our last launch of the season and include our night launch. So be there!