It's over, it's all over!! If you've won, you'll be contacted about payment and pickup. See this forum post for details.

Our next launch is scheduled for 28 May in Acton. If you're looking to fly high-power that weekend, MARS is hosting their annual Memorial Weekend launch in Geneseo, NY. 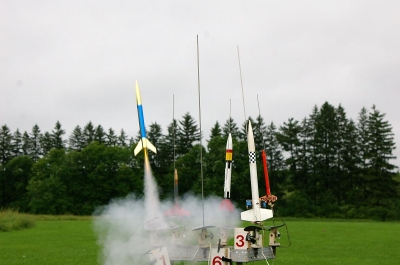 I keep hoping that if I wait long enough someone else will do a little write up on the launches but that doesn't appear to be happening so I'll fill up the empty space. Our May and June launches both had less than ideal weather. May was cloudy and cool but we still got in around 220 launches. For our June launch were were threatened by rain for the entire day although it never materialized. Attendance was lower than usual and we had a little over 100 flights. This seemed like a good time to try out the new 6 pad controller with the six pad launch table keeping set up and tear down time to a minimum. There are pictures in the gallery. If you took pictures please upload yours to the folder for the appropriate date. Uploading pictures is easier than before and if you need any help just ask. You can also find some pictures on the Fliskis website (May and June). There are some videos and you can find them in this thread in the forum.

We had a really nice day for our first launch of the flying season. It could have been a little less windy but at least the wind was blowing the long way on the field. We came up just short of three hundred flights with our usual range of 1/8A to J. There seemed to be a greater number of high power flilghts than usual and we had four hybrid flights which I'm sure is a club record. We also had several L1 certifications.There were a few out of state flyers including a contingent from CATO in Connecticut. The gallery still isn't working (webmaster Howie assures me the new web site will be done "real soon") but there  are some pictures here and here and video here. Mark Obremski, a local resident, stopped by our launch and took a few pictures. I put them on Flickr.