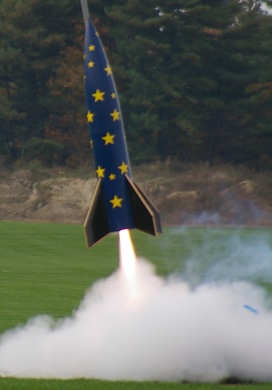 We had another successful joint club launch in Berwick, Maine, on Saturday. The weather forecasts weren’t too hopeful but the conditions were very good for most of the day except for the 10+ mph wind. Even that was toward the better part of the field with very few rockets drifting off the field.
There were fewer than 100 launches total but that included two Level 1 certification flights and one Level 2 flight; these three were successful. There was an attempt at a Junior Level 1 but a motor retainer failure made it just a practice flight. Boris put up a monster (his Magician, I believe, pictured here) on a K off of the new HP launch pad. The pad held rock steady and the flight was beautiful. There was even a K drag race. Bill put up a couple of hybrids and had to give one of them a Benny Hill-quality chase as the wind pulled the chute and rocket across the tabletop-flat field. At the low end, we had everything from 1/4A to G.
Scott grilled up some tasty hot dogs and Robert & Gloria donated a Mosquito kit and a 2-grain, 29 mm CTI casing with closure for the raffle. Boris won both and is trying to figure out how he can cluster the Mosquito. Speaking of Boris, in addition to his K flight, he put up two of his impressive saucers and another cluster - whose name escapes me - all of which pleased the crowd gathered.
The weather finally did move toward us in a threatening way so the launch was cut short and we packed up. The timing was perfect as the first drops hit just as we were entering the restaurant and had stopped by the time we finished eating.
To make up for scrubbed launches for both clubs over the past month, another joint launch is planned for 13 October at MMMSClub’s Berwick field. BTW, a couple of Maine Missile Moose & Squirrel Club tee shirts were spotted at this launch. There may be more the next time.