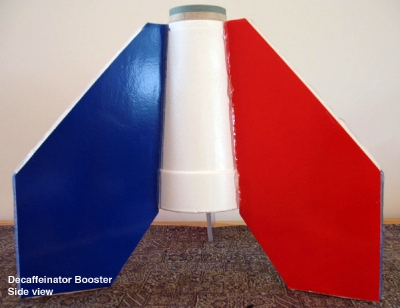 Cut the bottom out of the foam cup as described in the Decaffeinator Instructions (Step 10). Essentially, you want to cut a hole out of the bottom such that the BT-70 body tube fits snuggly into the bottom (now open) rim of the cup. To protect the foam cup from the engine exhaust, line the inside with aluminum tape. The tape is a little tricky to use as it sticks fast at first contact and is difficult to remove without damaging the foam cup. Use strips of tape up to 5" long placing them with about 1/8" to 1/4" overlap. Line the entire inside of the cup leaving no exposed areas but with minimal overlap (to minimize additional weight). Insert the forward end of the BT-70 body tube/engine mount assembly through the bottom (now forward end) of the cup such that the forward end of the body tube extends 1/8" beyond the forward rim of the cup. Holding everything in place, test the fit with your Decaffeinator. The booster coupler should fit snuggly into the aft end of the Decaffeinator's BT-70 body tube with no obstructions. If satisfied with the fit, remove the booster from the Decaffeinator and glue the foam cup to the BT-70 body tube/engine mount assembly with a hot glue gun, taking care not to get any glue on the coupler and not to melt the foam cup. 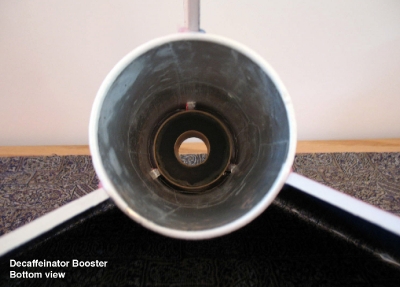 Once the glue has set, insert the booster into the Decaffeinator and mark the booster for fin placement with a pencil and using the fins of the Decaffeinator as a marking guide. Mark both sides of each fin. Remove the booster and using and ruler, extend the fin marks to the aft end of the foam cup. The fins will use a partial through-the-wall attachment. At the forward end of the booster they will attach directly to the internal BT-70 body tube. Below that the fins will attach to the outside of the foam cup. Using a sharp knife cut the foam cup at the fin markings as described in the Decaffeinator Instructions (Step 17), starting at the forward end of the booster. Cut the foam cup to a point that aligns with the bottom of the internal BT-70 body tube - about 2" to 2.5". As you cut, look inside the cup and stop cutting when the knife blade aligns with the bottom of the BT-70 body tube. Using the pattern provided, trace three fins onto the foam board. Then, using a sharp knife, cut out each fin. Dry fit each fin to the booster and trim the fins or booster fin slots as needed. Place a bead of hot glue along the entire root edge of the fin and attach the fin to the booster, the upper end of the fin attaching directly to the internal BT-70 body tube and the lower end of the fin attaching to the outside of the foam cup. Repeat this for each fin. When the glue has set, fillet the fins to the booster with a bead of hot glue. After the fillet glue is set, place a bead of glue along the edges of the fins, except for the top-most edge. 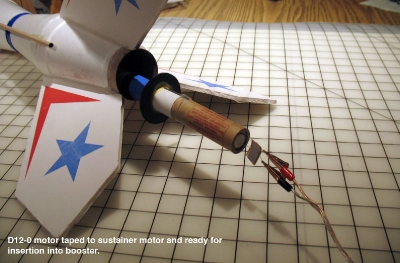 e booster presents a little bit of a challenge. Fortunately, I'm small and so my hands fit inside the booster (If your hands are too big, bring along your son or daughter or find someone else's son or daughter at the launch to help you!). Insert the sustainer engine into the Decaffeinator engine mount as you normally would. Next insert the igniter and plug into the booster engine and bend the igniters downward such that they do not extend outward of the engine. I knew it would be too difficult to attach the launch clips to the igniters of the recessed engine once the rocket was on the pad. So, I made an extension using a 12" piece of 16-gauge speaker wire with a pair of flat alligator clips on both ends (but any method of wire extension would do). I attached my extension to the igniters in the booster engine and added a small piece of masking tape to both clips to help keep them attached to the igniter wires and to prevent the two wires

We've used an Estes D12-0 for the first stage and either an Estes D12-3 or E9-4 for the second stage, both with good success.

1. The foam cup I used came from a local ice cream parlor (I liked the look of the cup and kept it after I finished my milk shake). It is 7" long with its upper and lower diameters being the same as the Decaffeinator cup. The fin pattern provided here was designed to fit specifically to this cup and may not fit other 24 oz foam cups. Use the pattern provided here to cut a piece of cardboard first to test the fit to the cup you are using. Modify the cardboard fin to achieve a good fit and use this as your final fin template.

If using a Decaffeinator size cup for the booster, then use the fin marking guides for the Decaffeinator according to the instructions (Step 13). To get a fin pattern for the partial through-the-wall attachment, you will need to trace a fin guide that is a hybrid of the two Decaffeinator fin guides.

Whatever size foam cup you decide to use for your booster, it is easiest if the cup's top diameter is not larger than that of the Decaffeinator cup so as to not interfere with the launch rod. If the top diameter is larger, you will need to notch the cup or punch a hole in it at the appropriate location to accommodate the launch rod.

2. The aluminum tape I used can be found in most hardware or wood stove supply stores. A thick sheet of aluminum foil would also work, and could be glued to the inside of the cup with dabs of hot glue at several locations. Essentially, you want to line the inside of the foam cup to protect it from melting or igniting due to the hot engine exhaust, with minimal additional weight.

3. I added a bead of glue around the fin edges because I was concerned about the weight of the booster and any damage to the fins that would occur as it hit the ground. As it turned out, it wasn't necessary for this particular booster. It fell slowly to the ground and sustained no damage. Since the added weight of the glue did not seem to affect the decent, it's probably a good idea to keep it for the added protection.

4. An alternative to the partial through-the-wall attachment of the fins is to attach the fins to the outside of the foam cup as described in the Decaffeinator Instructions (Step 15). However, the advantage of the through-the-wall attachment is the added strength to the fins and added support to the internal BT-70 body tube. The BT-70 body tube is held in place only at the rim of foam cup. Attaching the fins to the internal body tube gives it extra support.

Full size images can be found here and a fin pattern here.