Our next scheduled launch is 14 August in Acton.

Nominations for club officers will take place at our 17 August meeting.

The 2021 schedule is available in the Events Tab or the hyperlink below.

We closed out our summer events in Acton with some of the best weather we’ve seen at a launch in a long time. The temperature and humidity were pleasant and the wind was not too bad. It did throw some people for a loop that we set up the ring of pads closer to the Route 2 end of the field than usual but that gave us more recovery space based on the wind direction predicted for the day.

We had 246 total flights including a few CATO’s that made it off the rod or rail. Estes black powder motors were the most commonly flown but we had a good mix of Quest BP, Quest Q-Jets, Aerotech single-use and reloadable composites and CTI reloads with impulse levels ranging from MicroMaxx to G. Lots of the usual suspects were there flying new and well used models and we had many newer flyers and families showing up and demonstrating their skills and some first timers that were as happy to find us as we were to have them join us.

There was an uptick in people volunteering at this launch, too (a trend I hope continues). I apologize in advance if I miss anyone but thanks go out to Linda for helping Matt 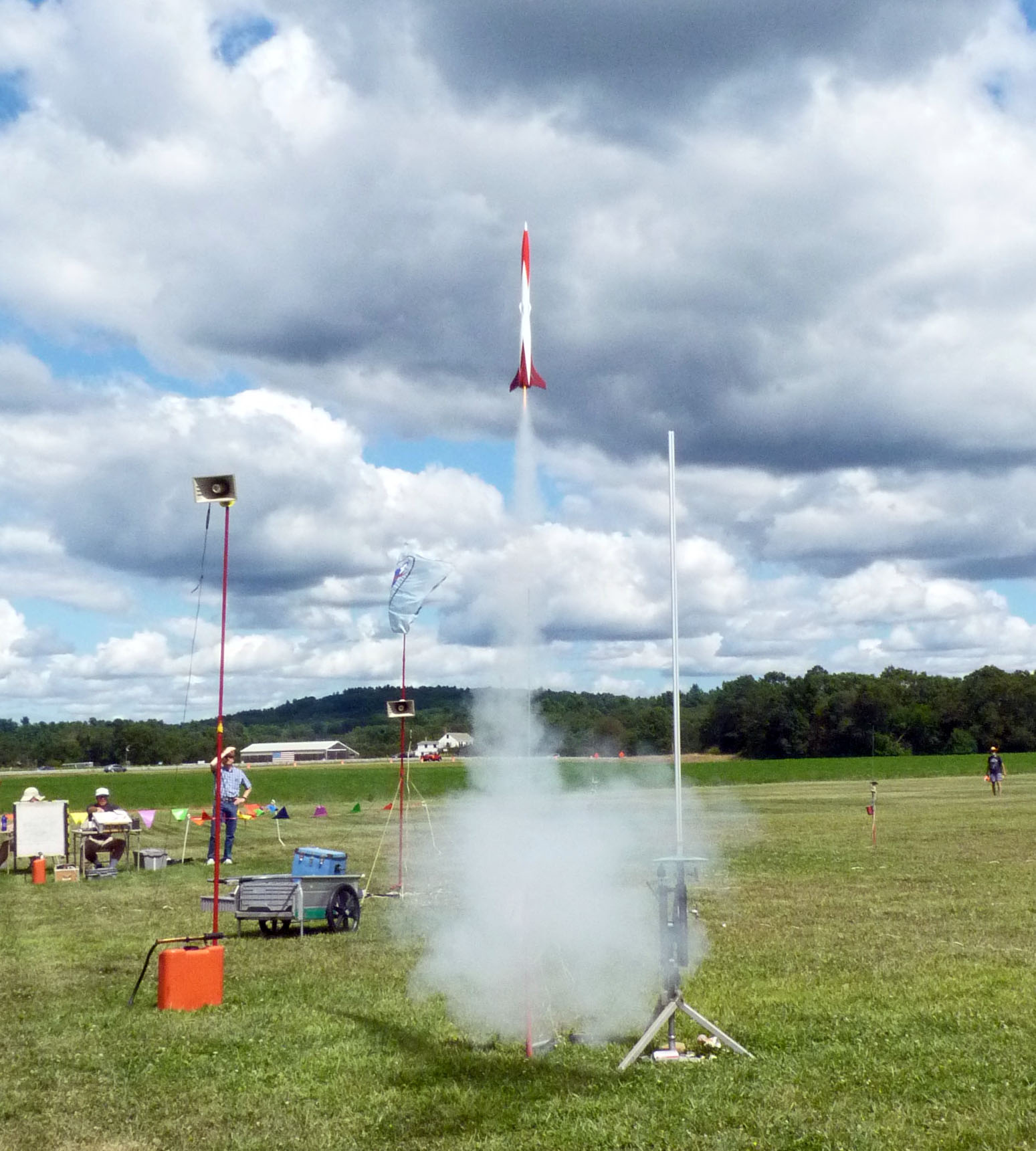 with the food service; to Christopher, Dan, Todd, Daniel, John and the others for help at launch control and safety check; to Jim for bringing his jawstand rail pad. Special thanks go to Sam Fineberg for storing and hauling the club trailer to allow Guy time off to tend to family and to Frank DeAngelo for doing a bank run because someone (me!) forgot the cash boxes Guy entrusted to me. And thanks, too, to all who helped with the most important and labor intensive parts of the launch, set-up and tear down.

The rest of our year will be spent in Amesbury. As we did in Acton, we’ll continue to celebrate the 50th anniversary of the Apollo 11 moon landing with Saturn V launches and any other manned rocket models that may come along. Please feel free to come join us with your rockets or just as a spectator.

We also moved some of the rockets and parts from Robert DeHate and raised some money for the Bill Spadafora Memorial Fund. Check the forum post to see what's left.

After a four year absence, the prodigal son, Dan Shea, has returned to New England and to CMASS. At Saturday's launch, he regaled us with his wonderful tales from the rocketry back waters of Michigan and the Florida panhandle, and enthralled us with his launching prowess by launching his 'Little Red Rocket' eleven times! In his honor we feasted on hot dogs, snacks, Orange Crush and cake! (OK, the cake was actually for Matt's birthday; but it fits better with this story line.) We all are excited for Dan's attendance at our future launches! Welcome home Dan!

The weather was a lot better than the last launch; not nearly as hot and some clouds to block the sun. It was windy though, and for most of the day the wind blew toward the trees. By my estimate, we had around 50 to 60 people at peak and over 30 vehicles. Now for the numbers: we had 155 'woosh-pops' on Saturday. That included 14 two-stage rockets, which I guess technically is woosh-woosh-pop; a two motor cluster - woosh-woosh-pop-pop; three motor cluster - woosh-woosh-woosh-pop-pop-pop; and a two motor cluster, two-stage rocket - woosh-woosh, woosh-woosh-pop-pop. Great... now I lost track of my wooshes and my pops! However, I do know the range was 1/2A through G77. Howard again tested the limits of the field with his Falcon 10 launched on a G77, which probably did hit 1000 ft and returned safely to the field with the use of Chute Release. Very nicely done! Mike Gallo launched a very nice Apogee Saturn V also on a G77. It was a great flight but unfortunately landed in the trees. He did get back the bottom half. Hopefully, he will get the top half back soon. We did lose a few other rockets as well in the trees and in the squash field. Scott Clement launched his 'Soft Serve' from his summer series and Jim Flis was there too - just launching for fun! Pictures are in the Gallery; please post yours.

Yes it was Matt's birthday and his wife brought a very nice and tasty cake to celebrate. Thanks to Matt and his wife!

After the launch the crew headed to the True West Brewery to drink beer - and then to the West Creamery for ice cream! Many thanks to all those who volunteered: Kenn Blade, Guy Wadsworth, Frank and Linda DeAngelo, Matt and Carmine Laudatto, Ed Pattison-Gordon, Todd Lainhart, Tony Vincent and all those I forgot to mention.

Will contest flying return to CMASS? Stay tuned boys and girls because our next launch is again in Acton on Aug 24th - same Bat-time, same Bat-channel!